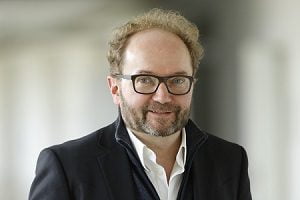 Nikolaus Müller-Schöll is chair of theatre studies at the department of theatre, film and media studies of the Goethe-University in Frankfurt/Main since October 2011, head of this department and at the same time head of the master program in dramaturgy as well as of the international master in Comparative Dramaturgy and Performance Research. Before he has been professor for theatre studies at the Department of German II of the university of Hamburg and as well co-director of the master program in performance studies for two and a half years (2009-2011).

He studied in Avignon, Hamburg and Baltimore German (with a major in theater and media), art history, philosophy and political science and finished his studies with a M.A. at Johns Hopkins University, Baltimore. He got a phd at the Goethe-University Frankfurt with a dissertation on Walter Benjamin, Bertolt Brecht and Heiner Müller (dissertation advisor: Hans-Thies Lehmann) and completed his habilitation at the Ruhr-University Bochum in Theater and Performance Studies. He also absolved a school of journalism in 1987/1988 and worked during his studies and afterwards as a free lance dramaturg, journalist, translator and critics. From 1996 to 2000 he worked as lecteur d’allemand at the Ecole Normale Supérieure, Rue d’Ulm, in Paris. From 2000 to 2002 he coordinated the Frankfurt Graduate program on “Experience of time and aesthetic perception”. Afterwards he worked as a fellow of the Maison de Science de l’Homme at the department of theatre studies of the Université de Paris 10, Nanterre.

Between 2004 and 2009 he worked as assistant professor at the department of theatre studies of the Ruhr-University Bochum. From 2007-2008 he substituted for Heiner Goebbels as professor at the Department of applied theatre studies in Gießen. He curated numerous conferences and workshops and conceived and directed in the year of 2010 the international summer academy Hamburg “Performing Politics”. In 2016 he directed together with Gerald Siegmund the international congress “Theatre as critique” in Frankfurt and Gießen. He is currently Vice-President of the German Society for Theatre Studies (Gesellschaft für Theaterwissenschaft) and member of several boards and jurys.