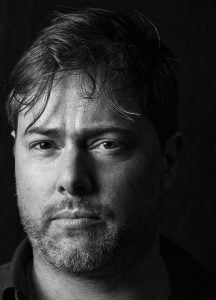 The Swiss director and author Milo Rau (*1977 in Bern) studied sociology, German and Romance languages and literature in Paris, Berlin and Zurich under Pierre Bourdieu and Tzvetan Todorov, among others. Since 2002, he has put out over 50 plays, films, books and actions. His productions have appeared at all of the major international festivals, including the Berlin Theatertreffen, the Festival d’Avignon, the Venice Biennale Teatro, the Wiener Festwochen and the Brussels Kunstenfestival, and have toured more than 30 countries worldwide. Rau has received many honours, most recently the Peter-Weiss-Prize 2017, the 3sat-Prize 2017, the 2017 Saarbrucken Poetry Lectureship for Drama and, in 2016, the prestigious World Theatre Day ITI Prize, of which he is the youngest winner, following such artists as Frank Castorf, Pina Bausch, George Tabori, Heiner Goebbels and Christoph Marthaler. In 2016, “Five Easy Pieces” became the first non-Belgian production to be selected for the Belgian Theatre Critics’ Special Jury Award, and was also invited to the Berlin Theatertreffen 2017. Milo Rau will assume the directorship of the NTGent beginning in the 2018/19 season.

IIPM – International Institute of Political Murder, based in Switzerland and Germany, was founded by Milo Rau in 2007 for the creation and international utilisation of his theatre productions, actions and films. Since its founding, IIPM has focused on the multimedia treatment of historical and sociopolitical conflicts, bringing to the stage such topics as the execution of Nicolae and Elena Ceausescu (“The Last Days of the Ceausescus”), the Rwandan genocide (“Hate Radio”) and the Norwegian terrorist Anders B. Breivik (“Breivik’s Statement”). Another performance project enacted a battle with a Swiss town parliament over the right of foreigners to vote (“City of Change”). In spring 2013, IIPM brought a completely new theatre format to life with two multi-day judicial spectacles (“The Moscow Trials” and “The Zurich Trials”). Most recently, IIPM has created a sensation with its internationally celebrated productions “The Congo Tribunal” (2015), “Compassion. The History of the Machine Gun” (2016) and the “Europe Trilogy”, which was developed over three years, from 2014 to 2016.