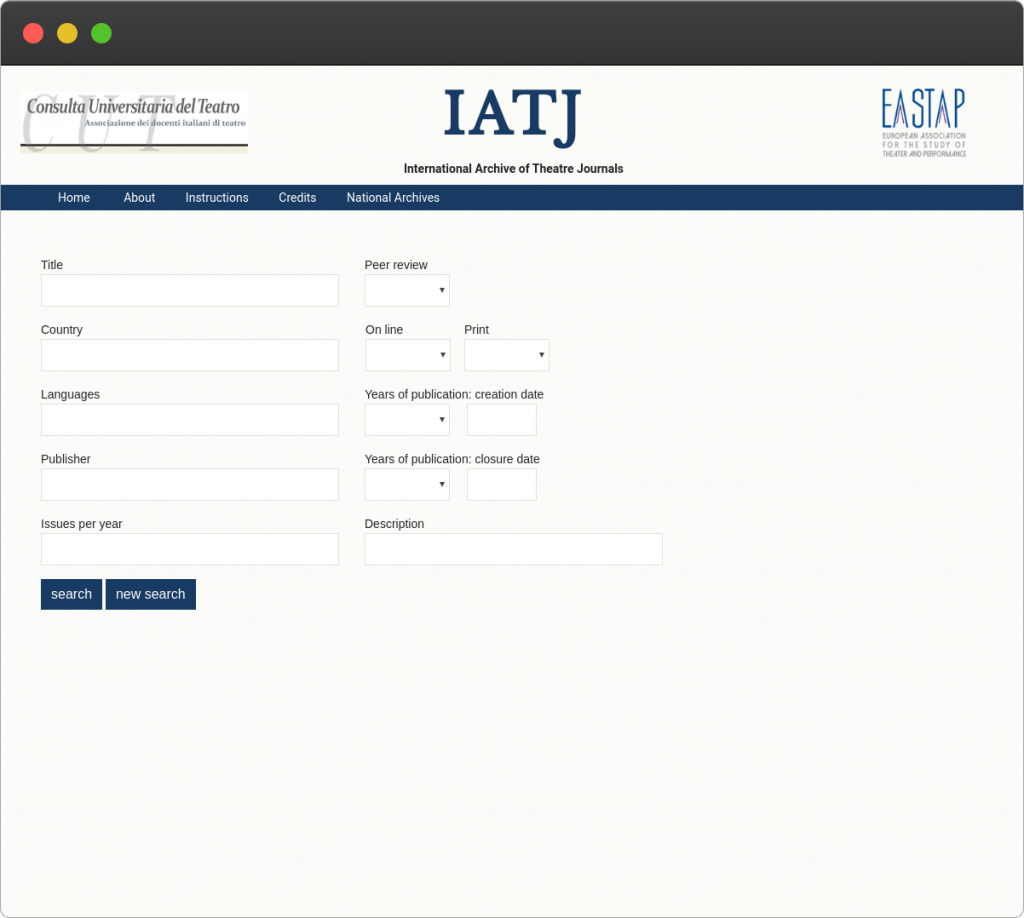 The database has been designed with the purpose of making any scientific journal on theatre quickly and extensively accessible. The archive includes both journals that are still being edited and journals that have been discontinued from the year 2000 onwards.

This initiative stems from the pilot project on Italian journals promoted and co-financed by CUT and FIRT-IFTR, thanks to the efforts and commitment of Prof. Christopher Balme and Prof. Franco Perrelli, presidents of the two associations at that time.

The structure of the database and the data related to Italian journals are the result of the collective work carried out by the “Commissione riviste e internazionalizzazione” (Journals and internationalization committee) of the CUT. The scope of the database is international. It connects theatre journals from different countries, and allows users to access their official websites, as well as relevant editorial contents – such as history, indexes and possibly texts – by providing their URL.

This initiative, now renewed and further developed by both CUT and EASTAP, aims to complete and update the census of European and international theatre journals.

“Dictionary of theatre and performance words and concepts“.

This transversal project could help overcome the misunderstandings that can occur between our different fields of studies (historical, theoretical, aesthetic, sociological, anthropological, performative, etc.). The numerous cultural acquisitions of Performance Studies (post-structuralism, aesthetic, linguistic and psychoanalytical theories, gender studies and media studies) have resulted in a proliferation of both conceptual references and of the meanings of terms in common use (including “performance” itself). It would be useful to define expressions such as  “social theater”, “social drama”, “theater of social interaction”, “proto-direction”, “new interpreter”, “postdramatic “,” after drama “,” intercultural theater “,” Eurasian theater”, and “ Interwearing Performance Culture”. It would also be useful to consider the relationships between various ideas and concepts, starting from a series of elements, such as the coining of an expression (when it was coined, by whom, why), its original meaning, the transformations of meaning, its conceptual framework, the realities it designates, and its contradictory uses. Also of interest are the interactions between the linguistic use of social and historical dimensions, and definitions which, although belonging to distant disciplines, undermine or confirm the use of certain concepts or mobilize corresponding notions in theater and performance.

Winner of the ERC Advanced Grant call for 2018, PuppetPlays is a research project funded by the European Union through the research and innovation programme Horizon 2020 and led by Didier Plassard, full-professor in Drama Studies at the Université Paul-Valéry Montpellier 3.

The main goals of PuppetPlays are:

PuppetPlays has the ambition to:

Access to all published results and all resources of PuppetPlays will be open and free.