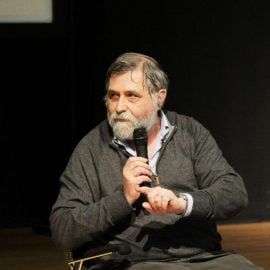 Gerardo Guccini teaches Dramaturgy and Theories and Techniques of Dramatic Composition at the University of Bologna. In 1995 he founded with Claudio Meldolesi the half-year “Rehearsals of Dramaturgy. Review of theatrical investigations”. From 2002 to 2015 he was Scientific Director of CIMES (Centro di Musica e Spettacolo – University of Bologna). In 2012, he and Matteo Casari founded the network series “Performance Arts: Horizons and Cultures” (AMS Acta). From 2018 to 2021 he was Scientific Manager of the Theatre Centre La Soffitta. His research concerns eighteenth-century theatre, the spectacular aspects of opera and contemporary dramaturgy, with particular reference to storytelling. In the latter field, he has published about the theatres and dramaturgy of Ascanio Celestini, Emma Dante, Marco Baliani, Marco Paolini, Matei Visniec, Saverio La Ruina, Stefano Massini, Marco Martinelli and Mariano Dammacco. Guccini has collaborated as a dramaturg with Marco Paolini, Marco Martinelli, Elena Bucci and Marco Sgrosso. Among the many projects conceived and carried out within the public initiatives of the Department of Arts, the conferences on post-dramatic theatre, the author as a performer and opera performance stand out.