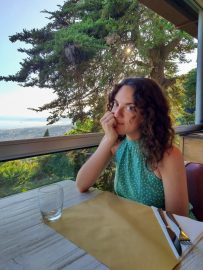 Alice is a PhD candidate at both the University of Warwick and Cergy-Paris as a recipient of the Eutopia Scholarship, based in the Theatre and Performance Studies department in Warwick, and the History department in Cergy. Her academic path started in Italy with a BA in English, German and Translation studies, and an Erasmus exchange spent at Warwick, where she returned for an MA in Theatre and Performance Research, and then proceeded to be taken on board with my research project, and a European scholarship. Her project investigated how theatre and European politics intertwine, specifically with regards to European International Theatre festivals, and how they act as cultural mediators and spaces of resistance; how their role can be that of laboratories for a European identity that we do need in these unstable times. Alice’s case studies are the Festival d’Avignon, the Bitef, and the Sibefest. Alongside her academic life, she has also been part of the European youth association AEGEE, founded alongside the Erasmus project, and officially recognised by the EU, as it works side by side with it in building a united, borderless Europe outside the political frontiers of the EU itself.